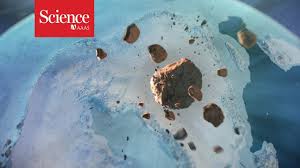 In the present culture of those publishing on matters claiming justification by the scientific method, a researcher is not encouraged to prematurely tout either work-in-progress or expected conclusions, and to only publish his results through a restricted list of credentialed publications. The reasons are complex and will be discussed here. That’s why the 3-year-old discovery and implications of a Greenland bolide crater larger than New York City or Paris was not publicly reported until last month, on November 14, 2018. You will notice in the list of managed press releases at the end of this post, that all spoke with authority from the facts of one scientific paper published within that set of credentialed publishers.

Although I’d written about bolides and theories that such were involved in the Younger Dryas cooling event and other events such as the 8.2 kya, 5.9 kya, and 4.2 kya climatic events, my latest #197 , #183 , and #182 earlier this year only spoke of less-conclusive sources, unapproved by the folks who manage accepted doctrinal speculations.

Happily, I follow a young YouTube investigator who presented a scoop on this Bright Insight episode three weeks ago.

Needful to say, others’ prior global research on evidence of this event was shrouded by the disclaimers of the lavishly-government-funded private and federal (e.g. NASA) academic community.  These financial beneficiaries of federal funds control their publishing market and stifle outsiders’ access to scientific publications. Moreover, they feel free to call their own circle’s work product “Settled Science” and misrepresent opposing researchers as “deniers.”  Using their monopoly on scientific publication, these label outside research as unsubstantiated and unproven—while denying publication to opposing views which the true Scientific Method would require be subjected to published criticism rather than dismissive ad hominem innuendo.

This subject is consistent with my longstanding complaint that research which is publicly funded and cannot be classified at the Top-Secret level of national defense should be freely distributed to the taxpayers who fund it. Don’t tell me that I cannot receive this benefit just because the Chinese, Russian, and other moochers will steal it. I’m more worried about Deep State moochers and government corruption with its incessant contempt shown the free citizenry of my country. Anything funded by my government belongs to the citizens by definition. Any company that profits from government funding owes a dividend to the citizenry of a percentage of the profits equal to the percentage of the funding (capital) sourced from my government.

As mentioned above in Bright Insight, two-years ago a Ted Conference speaker named Graham Hancock (note the patronizing tone of his bio on Wikipedia) gave a lecture titled “Is the house of history built on foundations of sand?” in which you will find a Ted disclaimer overlaid on the video of the entire lecture (at least up to publication of this blog). This is a prime example supporting my arguments about stifled (they like to call it “curated”) scientific opinion over the 4-years I’ve written this website’s posts.

The effect of the bolide was a 1,200 year “nuclear winter” beginning about 12.5 KYA, coincident with the previously inexplicable Younger Dryas cooling period which interrupted the initial warm-up at the onset of the Holocene.

Bright Insight gave us the headlines, and synthesized what had just been announced to us hoi polloi.

Below is a list of links I have compiled of official announcements of the Hiawatha Crater study which came out in the past two months.

This site uses Akismet to reduce spam. Learn how your comment data is processed.